Attention people who enjoy seeing others smile at them…

Attention people who are going through some rough times

Smile For a Change 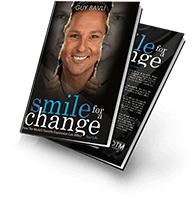 FREE BOOK that transforms how frequent you smile

(and how often people smile back at you)

How the wold’s favorite
expression can affect Your life

If there is one thing that we have learned this year it’s this. Whenever you think that things are about to get better… they get worse. People suffer from sickness, poverty, hunger, and the fact they canceled the NFL

Working from home has created generations of people that hardly meet other people. The biggest pandemic is emotional. We can’t hug when we meet. We can’t shake hands. We are isolated and are disconnected from society. But we all have the power to overcome this and the promise is as big as our potential. 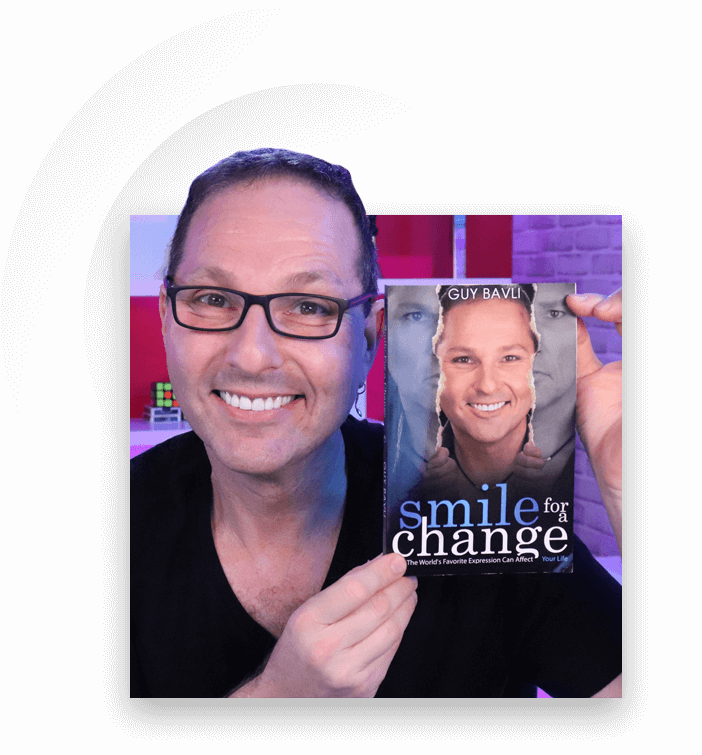 In the book “Smile For a Change” (178 pages), author,
Showman, and Mentalist Guy Bavli reveals an easy to master system that actually gets you to smile often, smile authentically and get people to smile back too. By going over case studies of people that have changed their lives by having a “great smile”, you learn the deepest secret of what makes us smile and how to feel great, connect faster, and even potentially
improve your health.

So, let’s make it super simple for you. Hopefully,
this will make you smile right now:

Hopefully, it will create a ripple effect and not only will you smile more often, but you will also notice lots of people around you that smile because of you reading through this easy read.

All I am asking is for you to cover the shipping cost, which has been reduced to the bare minimum. $12 for a signed copy and the e-book PDF version delivered immediately.

about the author – guy bavli

Guy Bavli, is an acclaimed Mentalist, Speaker and Author. He leads a long, successful career of nearly 40 years as a showman. In that time he regularly performed science-defying stunts and mind reading demonstrations. He performed for fortune 500 companies, hundreds of primetime television networks, and audiences around the world.

Despite this, Bavli claims no superpowers. His skills actually lie in advanced applications of psychology, physiology, Hypnosis, Psychological Illusions and human mind delicacies, gained through years of intense studies of influential communication skills.

In his early years, Guy was an obese child. He was often singled out and ridiculed for his size. But he soon learned to win his peers over by making them laugh with him and not at him! He knew how to make people laugh and eventually charmed them over. Through all of this Guy learned how a simple smile and a positive demeanor can have a ripple effect of unprecedented proportions.

Guy Bavli believes that a smile can create a profound positive change, in oneself and in our communities. The power of a smile is endless. It can relieve one of sadness, open doors to opportunities, and sometimes even cure or prevent sickness.

A smile a day can truly keep the doctor away, as it chemically changes our composition and lowers our stress levels. A smile has the power to single-handedly change perception—and get us the job of our dreams. Our smiles are the ticket to finding the love of our life. It changes us for the better. We can carry it with us everywhere we go and it is FREE.

SMILE FOR A CHANGE will leave you in awe of your smile, empowered like never before. No one can make a case for the smile better than Guy Bavli, a mentalist on a mission to create profound change in the world with a winning smile.

This book is especially good for: 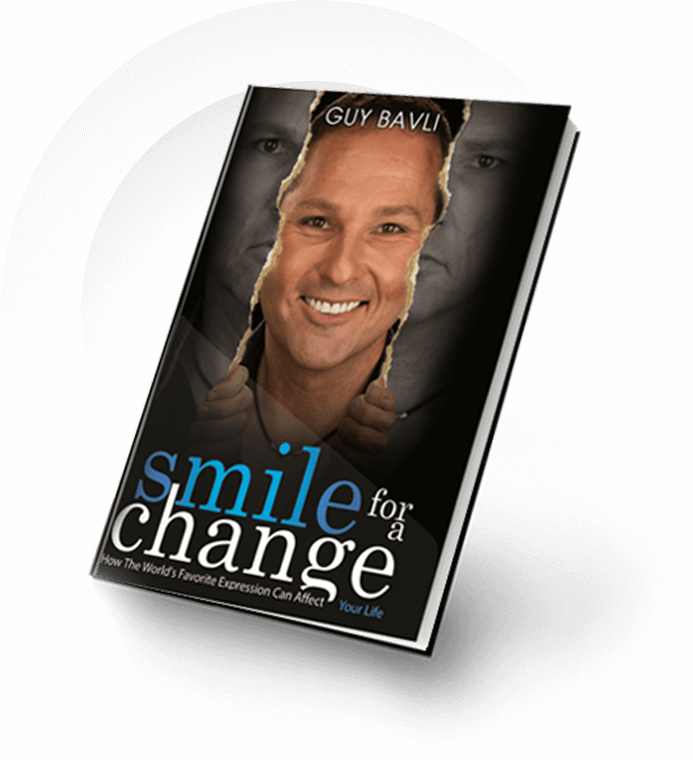 Business executives who want to improve their communication with their coworkers and clients.

Sales people, who would like to build a fast rapport with their clients and make a first impression and connection faster and deeper.

Stay at home – work from home Mom’s and Dad’s who are seeking a better balance in their stressful life with a better positive connection with their family members as well as a healthy positive mindset.

Parents specifically would be proudly leading by example and will pass a positive attitude to their kids and family members.

Students who seek balance in their studies are looking for an easy transformation to relax and feel better.

And many others too

Here is what you will get 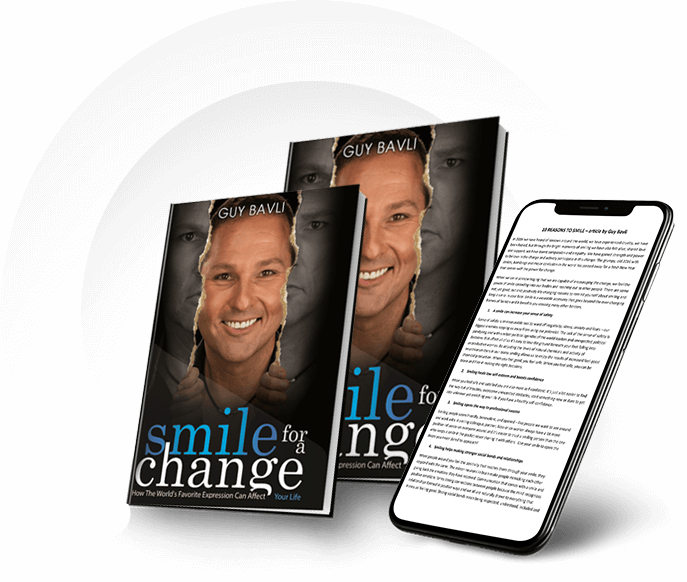 The book “Smile For a Change” (178 pages), softcover, signed personally by the author and shipped to you anywhere in the USA.

There are only 967 copies left at the moment of writing this. We are not printing on demand this is a real book that took Guy years to write and develop. 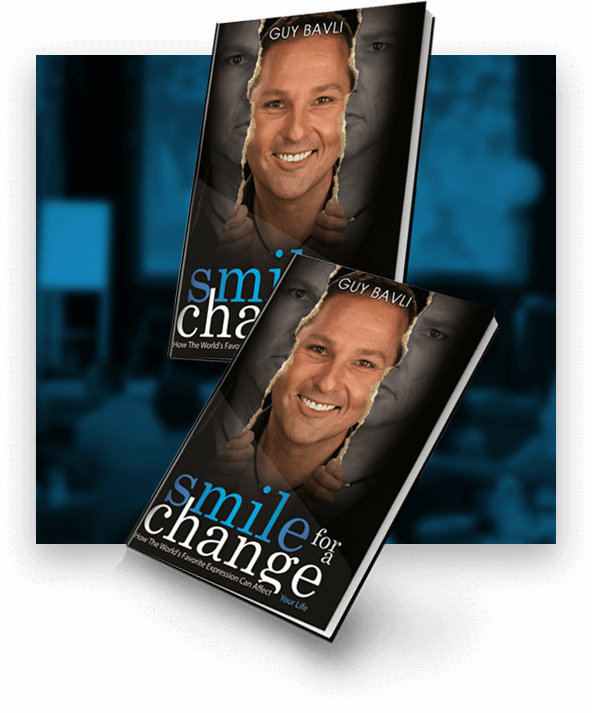 Invest under 15 minutes a day for a week and see how you smile way more often.Guy Bavli distilled the entire book into an easy to follow seven days system that includes:

Learn how to measure how effective a smiles makes you feel

Get daily reminder directly to your email for only seven days

Be challenged with two to three unique daily tasks that you are doing anyway, only this time you will be adding a smile to them

And many other practical ways that will make you smile, smile, and smile some more. Enjoy!

Bonus 2 100 Jokes, Videos and Quotes to Make Someone ELSE Smile

As a professional entertainer Guy Bavli has to regularly research and go through thousands of jokes, videos and quotes and distill them into THE VAULT. Usually Guy Bavli is forced to keep any of his jokes a professional secret. He almost decided to not share these as they are really that strong. People cannot resist the smile when hearing or sharing these.

But the end goal of the book was to make more people smile and you can actually be a part of that. So for the first time ever, Guy is opening up his vault of all things funny and you can see, use and share his private collection. 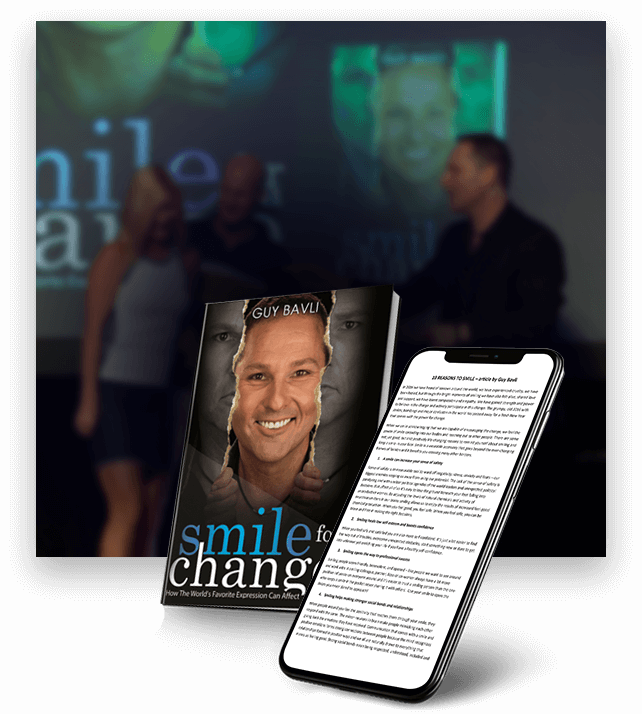 (your mission if you choose to accept it)

After entertaining people as a Mind Reader and Mentalist for 40 years I found out the hard way – you can’t make everyone smile. Even though I perform very often, to huge crowds in Vegas theatres, Casinos in Aruba, on Cruise Ships, and even these days in Virtual Events – there are only so many people that I can get to and make them smile.

My life goal is to make even more people smile and that’s where you come into play as you can help me. This book will not only make you smile more often, naturally, and with great pleasure. This book will transform people around you and they will smile back too.

That’s why I chose to give you this book for free, and only to kindly ask for you to cover the shipping expense at a reduced rate of $12. To make it super easy – I am signing every single copy, include the e-book version and the TWO bonuses (valued at $39) and I am confident beyond a doubt that this book will make you smile and will create a change around you. 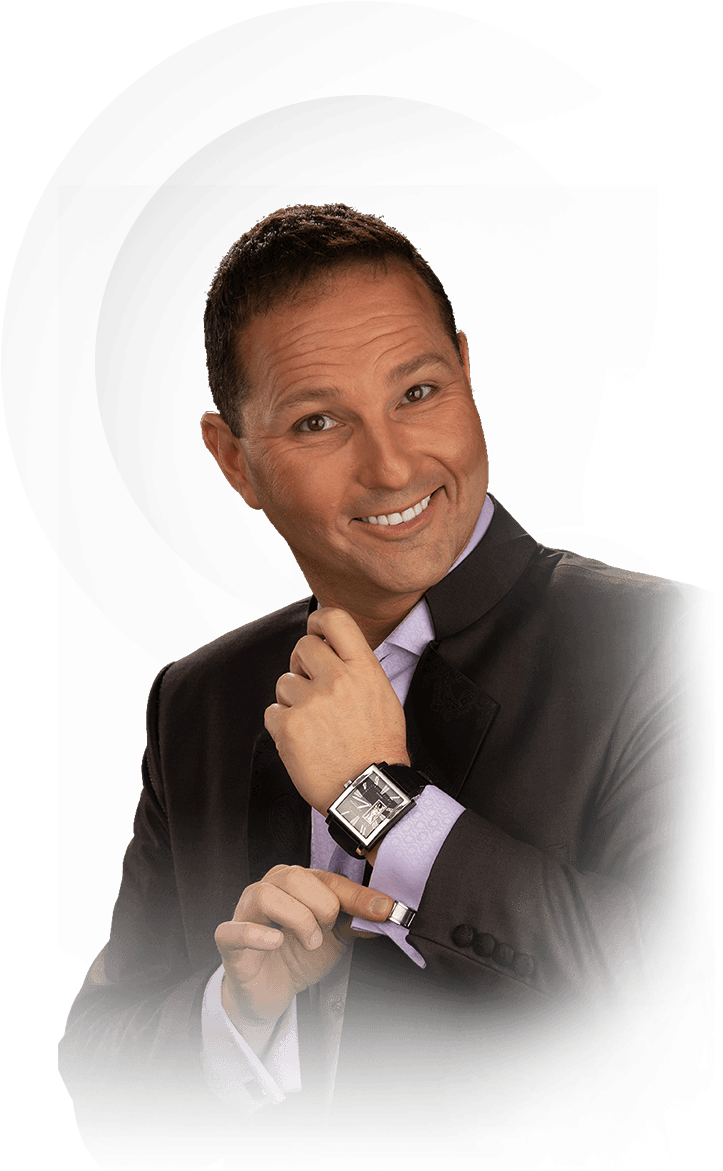 Cultural Smiles around the World

Cultural Differences in Our Smiles

Chemistry in Your Brain

Smile for Your Health

The Magic of Mimicking

The Game Changer in Your Face

Mimic What’s Missing in Your Life

The Difference to See

To Fake or Not To Fake?

It All Starts with You

Smile for Your Professional Success

A Smile for the Future

The Gateway to Authentic Smiling

Transform a Bad Moment in a
Good One

Learn About Yourself. Who am I?

Get comfortable with smiling

In 2016 we have heard of sorrows around the world, we have experienced cruelty, we have been fooled, but through the bright moments of smiling we have also felt alive,shared love and support, we have learnt compassion and empathy. We have gained strength and power to believe in the change and actively participate in this change. The grumpy, old 2016 with strikes, bombings and major confusion in the world has passed away for fresh New Year that comes with the power for change

When we smile acknowledging that we are capable of encouraging the change, we feel the power of smile spreading into our bodies and reaching out to other people. There are some not just good, but also positively life – changing reasons to remind yourself about smiling and keep a smile in your face. Smile is a wearable accessory that goes b eyond the ever – changing frames of fashion and it benefits you crossing many other borders

1. A smile can increase your sense of safety

Sense of safety is immeasurable tool to ward off negativity, stress, anxiety and fears – our biggest enemies keeping us away from using our potential.

The lack of the sense of safety is paralyzing and with unclear political agendas of the world leaders and unexpected political decisions that affect all of us it’s easy to lose the ground beneath your feet falling into unproductive worries.

By adjusting the levels of natural chemicals and activity of neurotransmitters in our brains smiling allows us to enjoy the results of increased feel-good chemical production. When you feel good, you feel safe. When you feel safe, you can be brave and free in making the right decisions.

Smiling people seem friendly, benevolent, and opened – like people we want to see around and work with.

A smiling colleague, partner, boss or co-worker always have a lot more positive influence on everyone around and it’s easier to trust a smiling person than the one who keeps a smile in the pocket never sharing it with others. Use your smile to open the doors you never dared to approach!

When you feel safe and satisfied you are also more self-confident. It’s just a lot easier to find the way out of troubles, overcome unexpected obstacles, start something new or dare to get into unknown yet enriching your life if you have a healthy self-confidence.

When people around you feel the positivity that reaches them through your smile, they respond with the same. The mirror-neurons in brain make people mimicking each other giving back the emotions they have received.

Communication that comes with a smile and positive emotions forms strong connections between people because the mind recognizes relationships formed in positive ways and we all are naturally drawn to everything that makes us feeling good.

Strong social bonds mean being respected, understood, included and supported. When everything is fine, some of us never think of caring about strong social bonds, but when the life hits, isn’t that what helps the most? 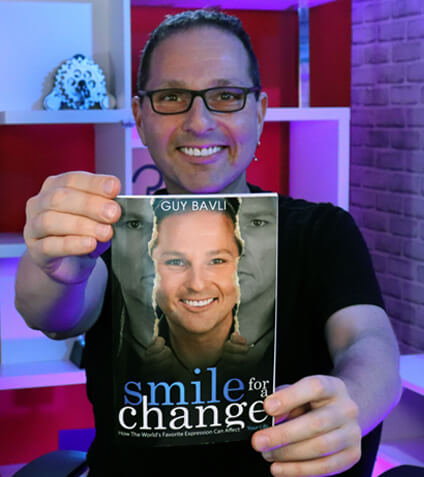 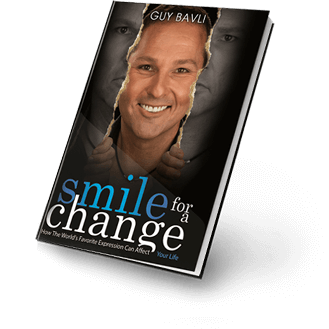 ONLY ONE copy per person

Get the Book NOW